SXA or not SXA is the Question what are your experiences?

I am not sure if I should use SXA in my project. Currently we want to use only the XP but in the future we would like to use XC too.

So, currently I think its not worth the price and the additional starting time for my Sitecore website when I create a tenant and I am using not enough components out of the box.

Is it hard to create new SXA components?

Faster time to market is not a preference, its a necessity now a days.

SXA is not just about its toolbox and pre-built components. Its about the entire SXA Website Development Process which help you to expedite the website development process.

In a non-SXA project you always have dependencies on the previous phase. Most importantly the Content Entry, this can never take place until all the phases e.g. User Experience, Visual Design, Front-End, Back-End are complete. Well there is a delta for the Backend development which can be overlapped with Content Entry but that is negligible. The Content Entry phase gets more bigger when you have Multi-site and Multilingual project to go live with.

Whereas if you are using SXA the Content Entry can start right from the Visual Design phase, when you are done with Wireframing. By Saying that when you will finish the Backend development, you will be having handsome amount of actual Content in place which also helps in more realistic testing compared with testing using Lorem Ipsum content (Which we normally do). 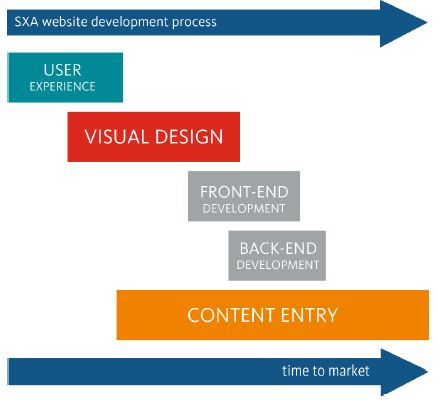 Additionally it also reduces your actual development time by using more than 100+ pre-built components. And most importantly if your designing/content/digital marketing team is skilled enough to work on Sitecore SXA, the time to market can be reduced tremendously. Plus everyone in your team like front end developers, content team and backend developers work consolidated on Sitecore utilizing the powers of SXA hence what all you can expect is a great outcome.

As David said, its not worth re-iterating all the features which SXA provides as you can find them on countless blogs and videos. Hence rather talking about Why Opt-In for SXA, let me list out few points on When and Why Opt-Out for SXA?

But believe me if you are good with these points you MUST use SXA. I mean its worth trying an Helix compliant platform bundled with good amount of pre-built components available by just drag-drop.

Of course, it is worth it! I will not write down all the features again as it was mentioned thousands of times on different blog posts. It's not just about the components which are shipped with SXA. There are much more features which will speed up your site development process drastically. Just a few articles from first Google results:

Regarding the components - believe me, you will not need to create a lot of custom ones. I think, that having 5 custom renderings that is already a huge number when you have SXA installed. Rendering Variants give you such a big flexibility that there is no need for creating custom renderings.

I'm still new to using SXA so take my opinion with a grain of salt. I will provide some examples to explain my position.

What I can say is that there are enough benefits to using SXA that I would recommend it but I can't say it's all green grass and rose petals. There's quite a learning curve as it relies a lot on SPE to create many things which aren't obvious to find if you need to serialize it all with TDS. It also introduces a number of new concepts and moves many things to the content section of the tree which makes it confusing what to serialize and what not to.

On the up side, it fixes a lot of odd behavior that comes with a stock installation of Sitecore such as managing multisite systems, duplicating content trees properly, providing easy access to placeholder settings, easier domain configuration and having a page local or site global datasource folder. It even has a concept of reusable page chunks (header, footer, nav) which I did't realize how much I needed until I had it. All of these things make it worth the using over building it yourself.

I think the biggest mental paradigm shift for me is with what components you're provided and how they are rendered. I'm not in love with everything about it because of the trade offs made but there's still a lot of good ideas that push you past any capability you use to have.

One such example is that components are no longer just a rendering item pointing to a razor file or controller method. They are now modules with a scaffolding infrastructure. On the one hand it's a lot of extra. On the other hand much of it is managed by SPE commands and is easy to add groups of components to one or many of your sites consistently.

Another new concept is rendering variants. On the one hand you need to manage your markup as content items, which every front end developer I've worked with has hated with burning passion. It creates a strange relationship with your razor file that makes it much more difficult to know how to handle many aspects of a interactive components (as opposed to just a visual component). There's even a complex decision tree to help decide which way to go. On the other hand it's an interesting idea that you can select different formations of a single component and it basically eliminates all of the time spent trying to get your dependency injection and model generation working with experience editor fields.

One of the most troublesome parts of it is how our front end developers lives changed with it. I didn't have a great experience as others seem to have had or is the intended process. We have very experienced front end developers who take on the role of building search friendly, accessible, responsive pages. They're used to controlling the structure, tooling and functionality. Typically they construct all the markup and style at once and back end developers would apply experience editing capabilities. With SXA the markup is divorced from the styles and either the front end devs have to do markup in the content tree or someone else with much less experience does it. Then the front end devs only job becomes a paint by numbers task. This task requires them to connect to the media library to modify the js and css files through a sync gulp task which isn't too bad but they are then given whatever framework was selected when the site was created which they don't control. This is where the most challenge of acceptance comes from with my coworkers. If this process worked better for the front end developer workflow it would pretty much be the undisputed best option. For now though it is less than ideal.

Not the answer you're looking for? Browse other questions tagged sxa sxa-storefront or ask your own question.

0
What are the Pros and Cons of using SXA?

16
Creating new renderings that are compatible with SXA
2
SXA Creative Exchange Error: Could not find any storage definition in your site. Export cannot be performed
2
Should we create project layer templates in a Helix solution using SXA
5
SXA what is the purpose of the Media folder under a Site
5
SXA multisite question
2
Is Sitecore XA different from Commerce XA?
0
SXA Component not appearing on published site on mobile devices
4
Integrated GraphQL is not working correctly with JSS with SXA