Just-In-Time exception on application recycle and boot up

On a clean 9.2 installation, after I make a change in the /bin folder or change something in the web.config, Sitecore crashes with a Just-In-Time exception, asking me if I want to attach a debugger to the crashing process. If I select yes, Visual Studio loads, but I am unable to attach a debugger, since the process has crashed. Afterwards, the site loads up just fine. The error only happens on the initial load, after a deploy.

And another line with:

I found the following blogpost which describes my exact problem: https://medium.com/@markgibbons25/sitecore-crashing-on-startup-with-internal-error-in-the-net-runtime-be5831e94b6e

However, the solution described does not work in my scenario. I double- and triple-checked that I do not have any duplicate assembly redirects.

If I do a deployment and then attach a VS debugger, I can see that the code throws an ExecutionEngineException: 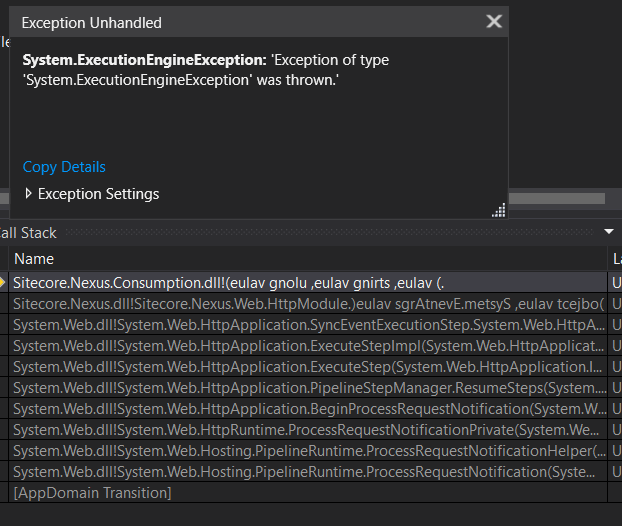 I tried to configure DebugDiag to collect a dump, but none of my crash rules (1 for the application pool, 1 for the w3wp process) are ever hit.

If you are on a Windows 10 build older than 1809, could you try installing the ".NET Framework November 2018 Security and Quality Rollup" as mentioned in the KB solution?

If you are on Windows 10 1809 or newer, could you try the binding redirect workaround?

Not the answer you're looking for? Browse other questions tagged installation or ask your own question.

3
Exception while executing the powershell script for Sitecore 9.0 installation XP0
6
As a beginner , what version of Sitecore should I setup and practice 8 or 9?
4
“The service cannot accept control messages at this time” while installing Sitecore Commerce 9 Update 2
4
Sitecore 9.1 and Identity Server
10
XP Scaled (XP1) how to validate installed application in each server are correct?
0
NotFound exception creating Solr cores on installation
1
Unable to add SXA components throwing application error in Sitecore 9.0.1 using sxa 1.7
1
“Execution Timeout Expired” exception while installing Sitecore 10.1