How can I render a "stub" one-line div for renderings hidden by personalization rules instead of having them completely removed from the DOM?

Our Sitecore 9.0 MVC solution makes extensive use of personalization rules to conditionally hide certain Renderings. But we have marketing automation software that scans the DOM for certain data-tracking attributes on all of the components (renderings). We would like to be able to tell if a component has been hidden and instead of rendering that component to the DOM, just render a non-visible "stub" like so:

I am planning on having the Models for these components throw their data-tracking attributes into a Dictionary in the HttpContext.Current.Items when they're instantiated, with the Rendering ID as the key. This Dictionary would only hold the renderings that will be hidden. That part isn't too hard. Then when the actual rendering takes place I need to somehow check if the current Rendering has an ID matching one in the Dictionary, and if so render the stub div with data-tracking attributes taken from this Dictionary, instead of skipping the Rendering altogether.

This is where I am having trouble. From my research so far, I think I have to override the Personalize Processor in the mvc.customizeRendering Pipeline using patch:instead. Or add a new Processor before this one using patch:before. I added a new class RenderHiddenComponents that inherits from CustomizeRenderingProcessor and have been debugging trying to find the right part of the Pipeline to plug into but no luck so far.

Does this seem like the right Pipeline and Processor to update to accomplish this task? And once I get inside the Processor and have access to args.Rendering, how would I 1. make sure it renders instead of hides and 2. make it render the one-line stub div instead of the actual component?

Perhaps I need to create a new component for this purpose with a Controller Rendering, Controller, Model, and View. The Model would contain the data-tracking field values, and the View would just be the hidden div that holds those values. Then in the Pipeline, somehow change the Rendering to this new one instead of hiding it. Or maybe there's a simpler way. Any ideas are appreciated, thanks.

You don't need to modify any piplines to do this. Create your component that renders the non-visible div, and then in your personalization, create a rule that runs only when your component is hidden. Instead of hiding the main component, just swap it out for your stub component.

In the personalization dialog. Turn on the Personalize the presentation of the component toggle, then in your rule, click the ... button under presentation and select your stub component, then set the content: 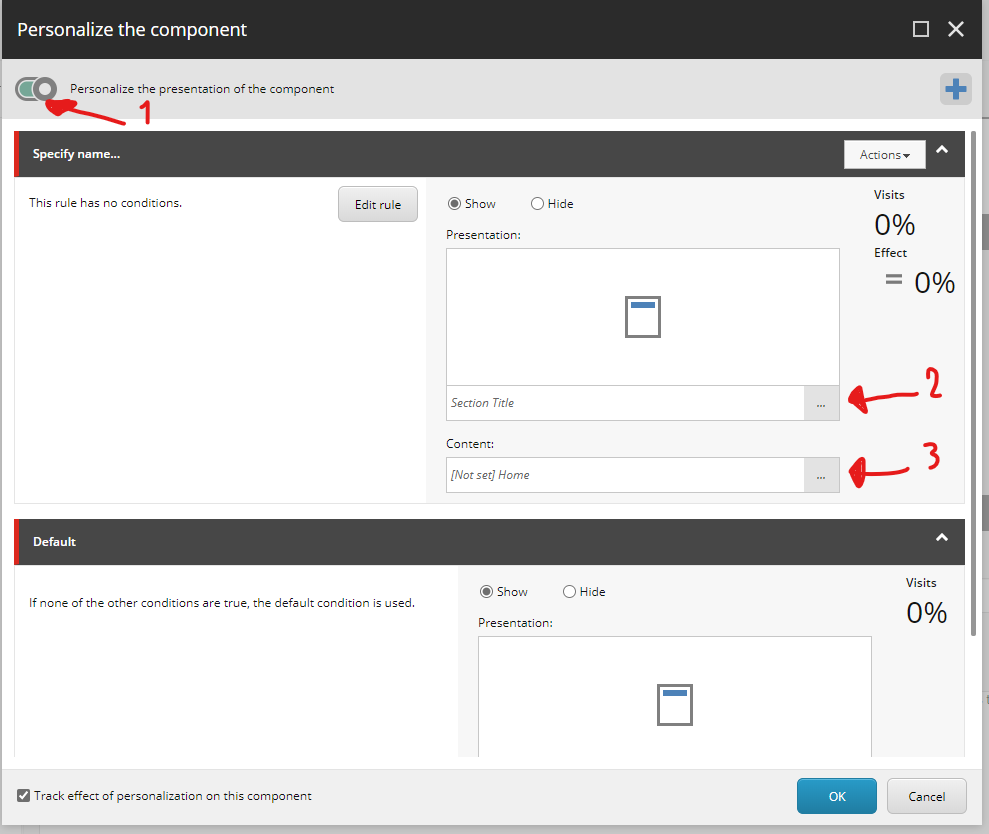 Ok, there is a better way to do this without using pipelines. We want to change what the Hide Rendering action does from hiding the Rendering to displaying a different Rendering that is just the one-line hidden div with the data-tracking attributes we want. In the Content Tree, we can search for "Hide Rendering":

In the Type field the value is "Sitecore.Rules.ConditionalRenderings.HideRenderingAction,Sitecore.Kernel". So this is the method that is run when a Rendering is hidden. Using dotPeek, here is the implementation of that method: 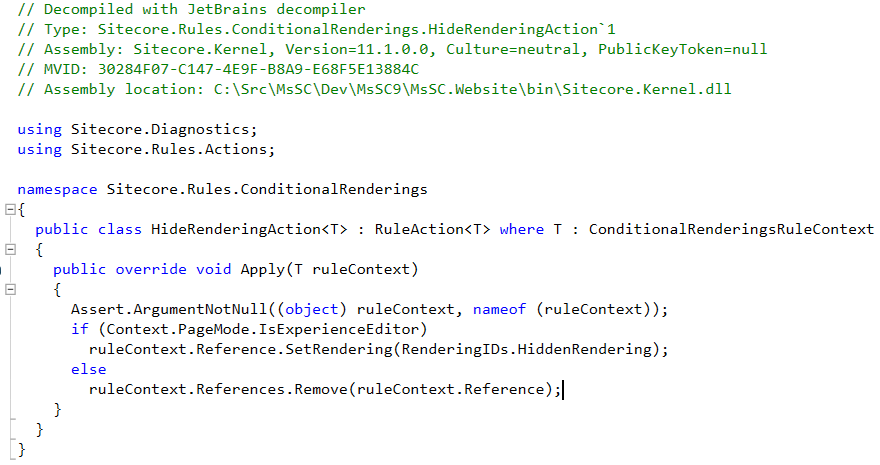 This is super simple. The key line is "ruleContext.References.Remove(ruleContext.Reference);". Instead of removing the rendering, we want to set the rendering to a new one that serves up a View with just the one-line div. So we just have to change the Hide Rendering content item's Type field to point to a class and assembly in our own solution. This is the same as the default implementation except for the last line:

Now any time a component is hidden by a personalization rule, we instead render the little hidden div, so our marketing analytics software can parse the page and better understand the personalization by seeing what components were hidden.

Not the answer you're looking for? Browse other questions tagged personalization pipelines or ask your own question.

5
Passing a parameter to controller rendering through URL
4
Request processor executing multiple times per page load
3
Can a sublayout/rendering trigger the item not found pipeline?
5
Sitecore AB Testing with different components
3
Sitecore.Pipelines.HttpRequest.EnsureServerUrl Processor very slow
0
Where can I put my custom pipeline to be executed right before Sitecore 8.2 Data Provider?
2
How can you run a personalisation test on two components with the same rule?