Hiding items in the Content Editor for certain users / roles

The content editors want to divide up their roles so that some editors of the site only have access to edit and change a certain area of the site (e.g. /news and all its descendants). These editors would belong to a particular role, e.g. News Editor. They would like it to be as easy as possible for them, so in the Content Editor they would only see the pages that relate to them.

To do this I have tried using item security to remove their Read access to the other pages of the site. However now when those users try to preview the site, it doesn't look right or it breaks because renderings aren't able to read the items.

I still want them to be able to preview the site as if they were a real user, so they may still need Read access to these items for that to work. Can I just restrict their view of items in the Content Editor, but have the site still function correctly?

I am aware I can remove their Write access and they would then be prevented from editing certain items and the site would still work for them, however that does not solve this problem. 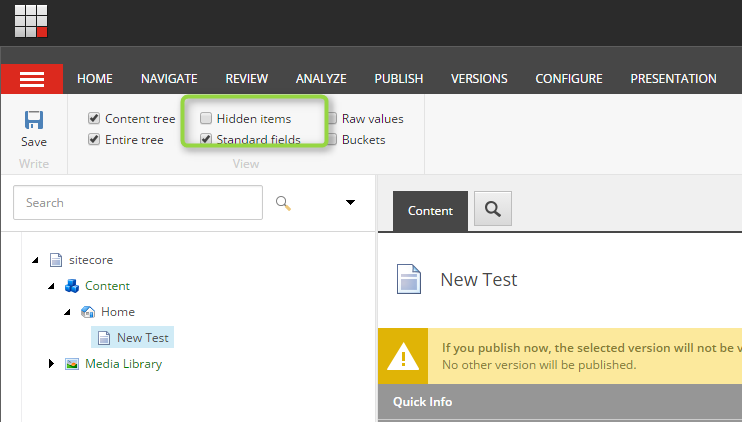 You can set it on the item or on the template's standard values. Just search for a Hidden field in the Appearance section.

So basically give the item read access as you have done, but then mark the top item you want hidden as hidden

Not the answer you're looking for? Browse other questions tagged content-editor security or ask your own question.

4
Can I exclude items that the current user doesn't have Read access to from display in the Content Tree?