We've written and tested two-way, Contact/Lead integration between Sitecore and a third-party CRM and it generally works as expected. The problem is how to deal with updates that come in into Sitecore via integration for a contact that is logged in and has an open session.

When the session ends, the integration update is overridden. The question is, how does Sitecore, or other third-parties for that matter, deal with Contact updates coming in via INT this conflict. We've researched this without as much as uncertified Sitecore developers can (old/badly-written blog articles) and didn't find much.

There ARE integration modules for other CRM apps, so how do they make it work? We have a theory but want to validate it before moving forward. Any ideas??

Have you tried Sitecore's Data Exchange Framework module? It is designed for integrating with third-party tools and the optional Sitecore Provider includes out of the box support for syncing/updating xDB contacts with/to/from a third-party system.

The documentation for the Sitecore Provider covers many of the components that are included out of the box for syncing data with Sitecore, though I believe that there are more included and available to you once you have the module installed.

Sitecore's Data Exchange Framework is essentially a two-way data transfer tool that is designed to be highly versatile, extensible, consistent in structure and fully scalable.

In their Documentation, Sitecore describes DXF by stating that the:

Data Exchange Framework is designed to facilitate the transfer of data between two systems.

What Can DXF Do?

Here is a high-level of some of the things that DXF can do:

In their Documentation, Sitecore provides the following table that identifies three examples of what DXF can do:

DXF is fully scalable, and can be run outside of Sitecore to reduce load via the Remote SDK.

Scaling DXF by running it remotely is similar to splitting a Sitecore instance by role (e.g. CM, CD, Reporting, Processing), except that no additional Sitecore licensing is required!

The Data Exchange Framework essentially runs by mapping data between two endpoints as part of an execution process called a pipeline batch.

Pipeline batches essentially define zero or more DXF pipelines that should execute in the defined sequence when the batch is run.

Each pipeline step executes a specific piece of logic for its pipeline. For example, a pipeline named "Read Foos data from Bar CRM" may have the high-level goal of reading "Foo" data from a CRM named "Bar". The first pipeline step in the pipeline may be "Read Foos from REST API", referencing an endpoint item named "Bar CRM REST API Endpoint Settings". The endpoint item would define the settings for connecting to the Bar CRM's REST API. The second pipeline step may be "Iterate Foo data and Run Sync Pipeline", which has the job of looping through all of the retrieved "Foo" data and running a second pipeline for synchronization for each "Foo" that was read.

For Sitecore Hackathon (and we have continued development since), my team members (Pete Navarra and Hetal Dave) and I created an Azure Provider module for DXF named PaaSPort that provides everything necessary to rapidly configure Azure resource visualization inside of the Sitecore Content Editor. We also have API reference documentation, including descriptions of everything that plugs into DXF and more.

Note: I do not write this section to self-promote, but rather to give you a glimpse into a real-world use-case of DXF that has already been implemented and that you can use as an example to help learn about DXF. If you have any questions or issues, feel free to email the team at sitecore.theinjectables@gmail.com.

The PaaSPort module's Azure provider is designed to retrieve data from Azure services and the included demo creates Sitecore items to represent the various resources (Resource Groups, SQL Servers, Storage Accounts, CDN Profiles, etc.) as Sitecore items. Of course, Because PaaSPort is a module for DXF, Sitecore doesn't have to be the destination for the data. The PaaSPort module's Azure provider could be used to export this information to a file, send it to a third-party system, and much more.

In the following screenshot, you can see the endpoints, the pipeline batch, and the pipelines with their pipeline steps, all of which are used to retrieve Azure Resource Group data from the new Azure client services and create items to represent that data in Sitecore: 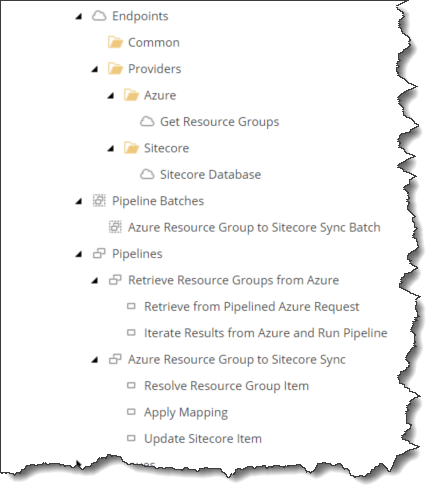 Additional analysis of the items in the screenshot:

There is much more to DXF than what is included in this post. The documentation for DXF is pretty excellent and the Getting Started tutorial is thorough, easy to follow, and detailed/specific enough that I would even recommend it for developers new to working with Sitecore. It does take several hours, but as you run through it, you will learn all of the concepts and components necessary to understand DXF and you will have prepared yourself for expanding your implementation to support the integration that you're looking for.

Getting Started with DXF

While a bit lengthy, the Getting Started guide is pretty straightforward to follow, and takes you end-to-end through creating your own custom provider to begin syncing data.

Provided and Supported by Sitecore at no Additional Cost

One of the great things about the Data Exchange Framework module is that it doesn't incur any additional licensing costs, and since it is provided by Sitecore it is also supported by Sitecore under your existing Sitecore Support plan.

Not the answer you're looking for? Browse other questions tagged integration or ask your own question.

4
What's the difference between Data Exchange Framework and xConnect?