How does the SPAM detection work with EXM and Sitecore MTA

I want to explain to our client where the numbers from the SPAM complaints come from.
But I actually don't know how this gets tracked or functions.

Each email campaign report shows a bunch of different statistics. And Spam complaints is one of them: 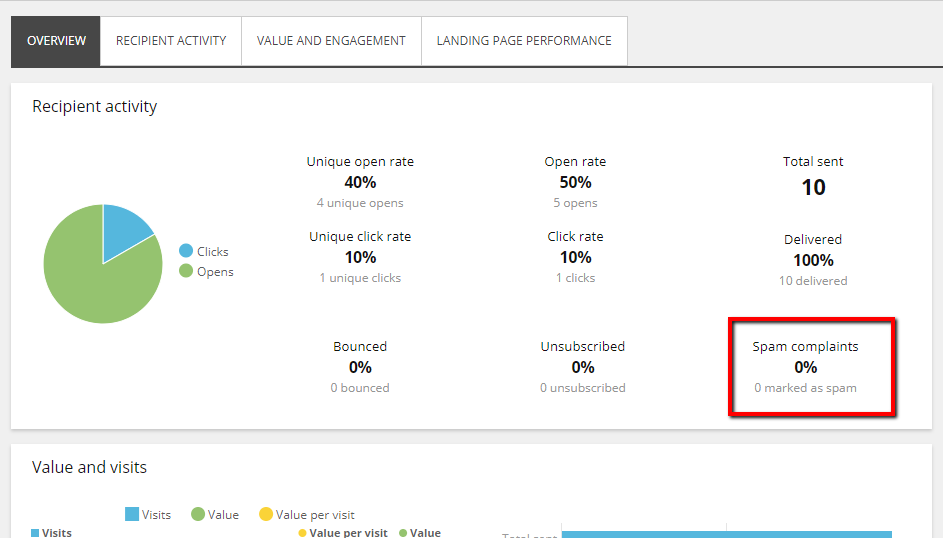 Is it the mail client itself that sends a message back, hey your email is spam? It's not when a user himself marks an email as spam?

So, how does SC know when a mail was marked as spam by its receiver?

What @steve-mcgill said is completely correct, but I can offer a bit of background on the implementation.

pulls complaints from the provider at a configurable interval. You can configure how often it runs, and how many complaints it should request at once.

These (spam) complaints will not be processed at once, as that could potentially have a negative impact on the performance of your CM server(s). Instead, EXM creates tasks in the Tasks table of the exm.master database.

In the same configuration file, the

is responsible for actually processing the complaints. The

is used to configure how the tasks are processed. There are a number of configuration options (warning, wall of text incoming. TL;DR below):

I do not suggest changing the default parameters unless you know what you are doing ;) TL;DR It allows EXM to throttle and retry tasks.

fires off the handleSpamComplaint pipeline.

In EXM 3.4+ the handleSpamComplaint pipeline is split up into three pipelines:

In EXM 3.3 these actions were done directly in the handleSpamComplaint pipeline.

In addition to this, the handleSpamComplaint pipeline creates an Interaction in xDB, which is what EXM is using to generate the reports you're asking about.

Every email service which receives email will have a different mechanism of reporting spam complaints to the ISP responsible for sending emails. The Sitecore Email Cloud entrusts our email provider to reach agreements with the various services such as Microsoft, Google, Yahoo, etc, to capture this data.

EXM then polls this information at regular intervals so that it can be included in the reporting dashboard.

Not the answer you're looking for? Browse other questions tagged exm or ask your own question.

1
In EXM 3.3 why does the link to Unsubscribe.aspx return a 404?
5
How to configure the "message transfer agent" for EXM 3.4
3
What is the difference between "clicked", "browse", and "productive" in the EXM report?
4
Does EXM support dynamic recipients and content?
7
How does Sitecore EXM track the Email Opens Rate?
1
Getting the email from a form in Sitecore EXM
4
How to transfer EXM campaign and mail between environments?
1
Does Sitecore's EXM render the email body content as HTML?