I have item level fallback enabled and it works.

On one particular template I have an SVG. When I switch languages, it generates a 404 in the content editor:

How come I dont just see the image/svg when I switch to Spanish. Why does it generate 404?

The template of the svg: /sitecore/templates/System/Media/Versioned/Image

I have most often seen this issue occur when using versioned media on multi-lingual sites.

Note that, by default, Sitecore ships with all media items set to be unversioned. This is for sake of storage space.

Why is unversioned media the default?

If all of the media on your site was versioned and you add a version for every language (so that media is never "not found") then the size of your media library would be:

In contrast, if you use unversioned media then the size of your media library would be:

This means that if you used versioned media then the number of languages that you have becomes a coefficient for the size of your media library, in the worst case.

Why is versioned media supported if the storage difference is so dramatic?

If your site makes effective use of versioned media then you will benefit from it greatly. This is because you will have avoided adding a separate image field for each language (if the instance of an image, PDF, video, or other media types is language-specific), and avoided having a separate media item for every language of the media. Additionally, you will be able to reduce your code and increase performance by simply rendering the field values for the context language (after checking for null on reference field types, of course). However, you need to make sure that versioned media is something that you really should use. If you don't have language-specific images then it's often a step too far.

How to tell if unversioned media is being used

There are two ways to tell if you are using unversioned media:

Have a look at the Media.UploadAsVersionableByDefault setting. If true, all media items will be added as versioned, by default. Otherwise, they will be unversioned (Sitecore ships with unversioned as the default).

While this will tell you whether or not media is uploaded as versioned by default, it won't necessarily tell you that your item is versioned or unversioned. Regardless of the value of this setting, you can manually add or create custom buttons/tools to add both versioned and unversioned media.

Using the template path to determine versioned vs unversioned

You can tell if unversioned media is being used by looking at the template of your media item. For each media template, Sitecore includes both a versioned and an unversioned template that can be used.

The following screenshot (from a clean Sitecore 8.1 site) shows a few examples of how Sitecore associates the versioned and unversioned templates: 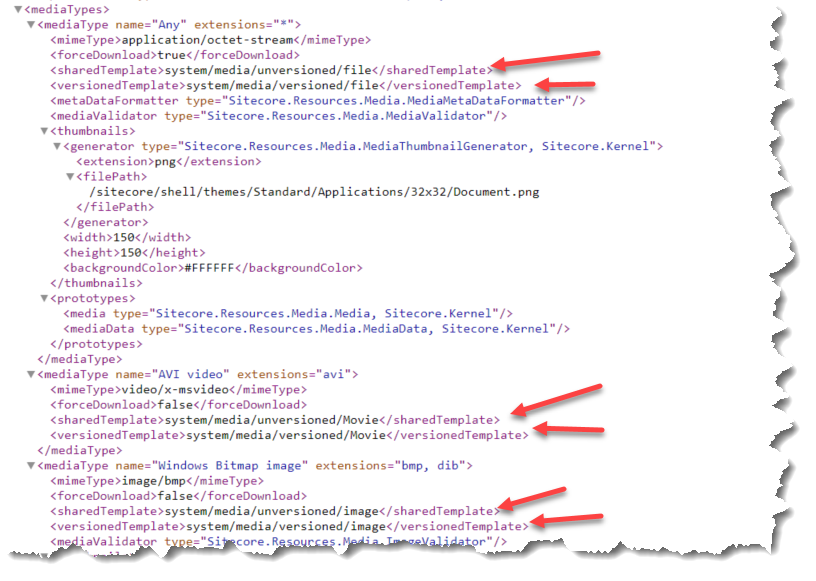 Not the answer you're looking for? Browse other questions tagged multilingual language-fallback or ask your own question.

4
How to programmatically set "Enable field level fallback" field on a Template Field item?
2
Get originating language code when using language fallback
1
Sitecore Content Search not returning back fallback items
2
How to find if Item language is falling back to another language?
1
Experience Editor Button Field Editor Button with Image Field Uploading in Client Language
1
Glass Mapper - Item not null when language version not present
1
Field level fallback value is lost when new version of a dictionary item is added
3
Load content editor with item pre-selected & translation mode turned on