The entire Sitecore Powershell context menu is not visible for any content editor. I've tried creating a user and adding every role (except for ones like limited content editor etc). The only way I can get it to pop-up is to make the user an Administrator.

The user with the role 'Sitecore Client Authoring' should be able to read the powershell context menu items when right clicking an item.

The entire scripts context menu is not visible to the content editor.

Steps to Reproduce the Problem 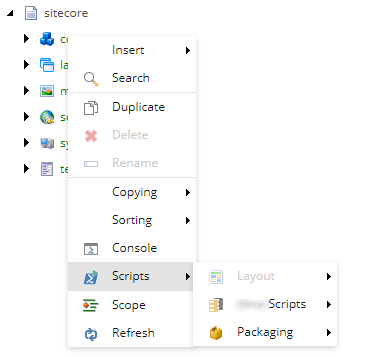 The Scripts context menu actually uses a different item in the core db.

The security settings can be seen here. In SPE 4.7 you should expect the visibility to respect sitecore\Sitecore Limited Content Editor (deny read).

In your screenshot it appears you are expecting the Edit Scripts command to work, when you actually need Context PowerShell Scripts.

I added a new user to the sitecore\Author role and without making any other security change I could immediately see the appropriate Scripts context menu.

Without any extra work I followed the script creation steps you provided and the menu appears as expected.

If the menu does not appear it would have to be a security role added to the user or to a specific set of items.

Are you sure you want to enable script editing for all content authors?

The problem I see with this approach is that you are giving a lot of power for those users and if they know their way around scripting they can mess up you website.

But you can still create scripts and make them available to those users through the click of a button for example. You can always create a ribbon button on the Content Editor which when you click it, it executes your script. Here you can find an example of generating a powershell report when users click on a button on the content editor. This points you to the right direction in this sense.

If your answer is still YES I want to enable that for content authors:

Not the answer you're looking for? Browse other questions tagged powershell-extensions or ask your own question.